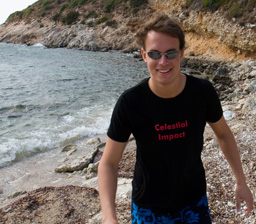 In the last couple of weeks it has not happened much on Celestial Impact due to vacation. But the summer has come to an end and we should push beta 8 out of the door as soon as possible. Key new features in beta 8 will be:
+ New renderer (much faster)
+ Melee weapon
+ Windows Vista support
+ Linux and FreeBSD dedicated server support

A short server creation guide is now available at our forums. It can be found here.
The guide contains brief instructions on how to create your own dedicated public Celestial Impact server as well as a few useful server commands that can be used to control the server.
Also, the User’s manual has been updated with the same information.

The Beta has now been up a while and things might seem a bit dead from the developers but I can assure you we aren’t. I would first of all like to thank everyone that has tried the game and reported bugs or suggested changes to us. These are issues we are working on to make a new beta version.

Our servers are still up and will continue to be soo. Unfortunately our servers are located in Europe (Sweden) and people from other places in the world get a very bad ping. You all can create servers that will be found by everyone if you under the create tab uncheck ‘Only LAN Clients’ option and make sure any router you might be behind forward port 14666 to your computer. A more detailed guide about creating server will be available soon. If you can host a permanent server please contact us.

Want something to deform? See you in Celestial Impact!

It is now time for an updated version. Some changes and a few bugfixes. It can be found on the downloads page along with system requirements. Don’t forget to post suggestions, ask questions and report bugs at our forum.

Celestial Impact Beta 6 is now out and can be found at our downloads page. Finally you can experience the asteroids for yourselves, destroying and creating terrain as you please while you and your team battles for the crystal.

This is the first open beta of the game so we will be using this version to test the servers stability over longer periods. We will be having at least one public server online at all times but you will also be able to create a server of your own that other players can join.

If you discover anything you think might be a bug or if you want to write suggestions or comments in general, please register at our forum and make a post.

Want something to deform? You’ve certainly come to the right place!

We are working very hard trying to create a version that could function as a beta that will be playable for everyone. We initially promised to have one right after the SGA Grand Finale, but since we didn’t win we felt we could delay the beta a bit to be able to add some extra stuff to improve the game speed and to fix the master-server so that you’ll be able to see all public CI-servers.

We are hoping to have one ready some time during the upcoming weeks.

After a crunch week we have finally completed the submission for SGA. This include a demo of the game (internally “Beta 5”), a promotional video and a short user’s manual. We in the team are really proud of the demo, the game really improved this week. We would also like to thank those of you that have helped us during the week testing the game, you know who you are, thank you!

If you are interested in playing we are sorry to say that we will not release the game or beta of it until after the SGA final (June 2). More information about a release will come. In the meantime we have a little something for you, I have uploaded a few new screenshots of the game and also some concept art under the Media section. But a picture dosen’t really tell everthing so you can also get the promotional video (encoded with Xvid, about 100MB)!

We are now waiting for June 2 and we promise your wait will not be that much longer… See you on an asteroid in a near future!

The core team (Daniel Carlsson, Henning Tegen and Daniel Wikell) have now gathered at Hennings home for a intense week of work. We will submit our game to Swedish Game Awards (SGA) so lots of stuff needs to be done or polished. You can say that the game is in closed beta now and we are getting closer to a open beta. If you want to try our game, let us know, we might need a few testers the next few days. Also a crowded server with players for recording material to the video that we are going to submit to SGA won’t hurt :).

Sound effects havn’t been the strong side in Celestial Impact, in fact, it hasn’t been there at all. But finally we got some really good work done by our newest teammember: Patrick Aleite! He got some great music and sound effects in the works and this was something we lacked skills and time for so thank you and welcome to the team Patrick.

The forum is also up and can be found at http://forum.celestialimpact.com/. Ask all your Celestial Impact related questions (or write whatever you like) there, if you have nothing to ask, download a beta of the game from the Downloads page on this site!
I have also posted some art on the Media page. More art and information about the game and what we currently are doing can be found at our Developer Wiki.